If you’re in Leigh-on-Sea, you may have seen me: I’m the one with my four year old on reigns and my two year old son walking independently next to me. I’m the one trying to manage my daughter’s almighty meltdown because we walked a different way back to the car. Or I could be the lady queuing for the Costa toilets AGAIN because we used them once and it’s now my daughter’s routine to use THAT toilet each time we walk past regardless of whether anyone actually needs it.

My four year old daughter, Edie, has special needs. I worried about a lot of things when pregnant with my first child, but autism was not one of them.

From the moment Edie was born, she was unique. She was extremely unsettled from birth, constantly screaming and very rarely calm or still. At first, I was told it was reflux, maybe colic, and that it will soon pass. However, for at least the first year of her life, nothing would calm her.

I’d look at other parents and wonder what I was doing wrong. Why couldn’t I settle my own child? Why was I finding this so difficult?

Then, as she started to grow, I noticed a difference to how other children her age were developing. Other parents were proudly showing off their ‘baby milestone’ moments and talking about the next developmental ‘leap’ and I just couldn’t relate.

Being my first child, I was nervous to raise concerns in case it seemed like I wasn’t coping. Seeing her for short periods of time you probably wouldn’t have noticed anything unusual, so friends and relatives would reassure me everything was normal. Being with her every moment of every day, I knew she was a little different. In isolation all her ‘quirks’ would look like a typical passing phase, but when you added them all together it just seemed a little unusual.

I was told that every child develops differently and that some children are unsettled for longer than others. Numerous times I was told of a distant friend or relative that hadn’t spoken until they were five and is now thriving. “Some children are just late developers”, I was told. Each well-meaning comment came from a good place but just made me feel more isolated in my concerns.

Edie used to rock back and forth a lot as a baby, she still does when she’s overwhelmed. However, friends would tell me their child did the same and “it’s a phase”. But Edie did it ALL the time. It didn’t seem like a phase to me. When she was a toddler she would obsessively switch lights on and off (she still does that too, which means that some evenings I have to make dinner to strobe lighting!), but friends would say she’s just exploring and it will pass.

As Edie grew and we socialised with parents of children the same age, I struggled to join in with, or keep up with their conversations: I had a heightened sense of protecting Edie and couldn’t take my eyes off her. I now know this was my natural mother’s instinct and that I understood from early on that she doesn’t see danger the same way most children her age do.

As a toddler, Edie would run off and not look back, whereas other children were always aware of their parents and would only go so far before stopping (she still runs off, or ‘bolts’ as I call it, except she’s now bigger and faster which is another challenge altogether).

To other parents I may have seemed like an overprotective parent, always on edge. It is very hard to explain that you ‘just know’ your child doesn’t have the same emotional connections as the majority of children. For example, at nursery Edie wouldn’t show any emotion when I collected her at the end of the day, but I’d see other children running to their parents with excitement. No-one else would have noticed, but I did and at the time it broke my heart. All these signs I can now relate to as social and communication challenges. 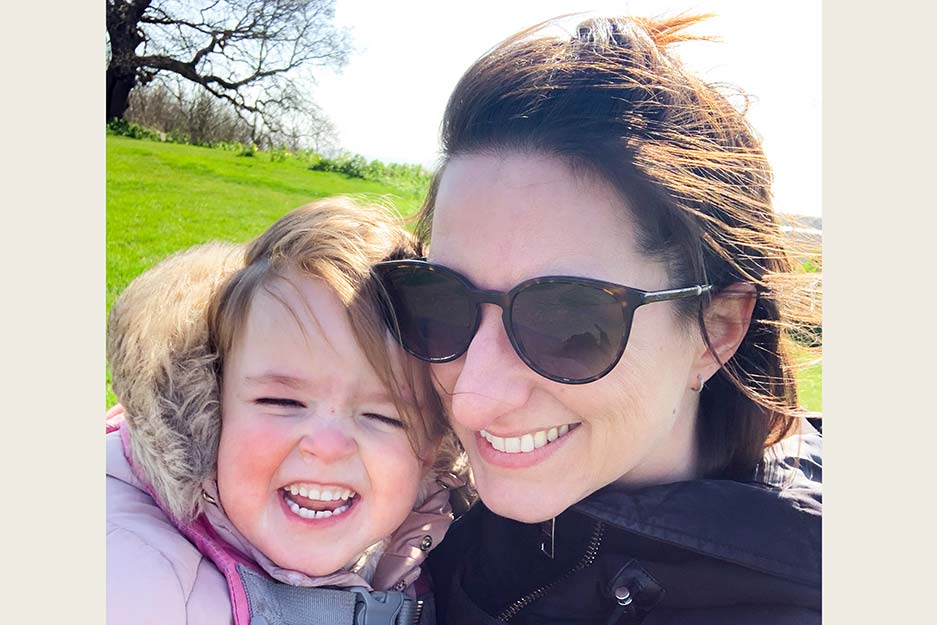 I was very lucky that Edie was diagnosed early due to the fact that she was in the system for other things such as hearing impairment. Whilst the initial diagnosis was difficult to hear, and adjusting to the fact she has a life-long condition led to many tears, the more I’ve read about autism, the more I understand her.

Children’s birthday parties used to be extremely stressful as my husband and I would take turns trying to catch Edie as she ran around the parameter of the room, determined to find an exit. I now know this is due to being overwhelmed so if it happens we take her outside and sit with her, usually singing loudly (one of her very adorable ways of self-regulating), until she is ready to go back in. Adapting to her rather than trying to make her adapt to the ‘norm’ has been a game changer for us.

Edie is an extremely funny, warm and affectionate child with a real innocence about her and the way she sees the world. I am so honoured to have her in my life. However, it’s ok to acknowledge that raising a child who sees the world differently, and is unable to communicate properly, is both emotionally and physically challenging. For me it comes with real lows, accompanied by huge tidal waves of joy when Edie achieves something that is so simple for the majority of children. Just yesterday she said a new sentence, in context, containing three words and I could have burst with pride (it was ‘this cup empty’ for anyone interested!) In addition to Edie, I also have a spirited toddler and looking after both of them on my own can be extremely stressful at times. It has taken me a long time to openly acknowledge that there are things that I simply cannot do on my own with both my children due to Edie’s needs.

Being new to Leigh-on-sea, I have been exploring the support on offer and was delighted to discover a charity called Little Heroes ASD Support. When I spoke to the lovely lady at their drop-in I had a rush of emotion. Someone who understands, just completely gets it! The charity has a new space on London Road and in the next few months, or when we are allowed to socialise again post corona-virus, they will be expanding so they can support more families with autistic children (keep an eye on their website for info).

There is also a wonderful podcast called Autism & Us (do check it out!) that talks to parents of children on the spectrum. Every child on the spectrum is different, but many of the challenges parents face remain the same, so for me it has been beneficial to hear from other parents on a similar journey.

I want to share my story because I am passionate about increasing awareness and understanding of this non-visible disability so that anyone suspecting their child is unique, or anyone dealing with the challenges a child with special needs presents, feels less isolated.

Being a parent can be challenging for anyone, but having a child with special needs adds another layer of stress and anxiety unimaginable until you have experienced it. Even more so at the moment when most of us are confined to our houses at this very surreal time. Now is a time for understanding and for supporting each other as much as we can.

I do hope that sharing a small element of my story (I could write so much more!) may help someone, in some small way.

As part of Foster Care Fortnight (11-23 May), Southend-on-Sea Borough Council...

94% attendance for first week back at school after lockdown

94 per cent of primary and secondary school children in Southend-on-Sea retur...