All over the word iconic restaurants can be found. In every city, these culinary treasures have remained untouched for generations. They don’t follow the crowd, and proudly stick two fingers up to food trends and the latest fads. Most will have waiting staff who’ve worked there for decades, serving loyal regulars week in week out. These restaurants just do what they’ve done for years and people come flocking. In simple terms they are no nonsense eateries serving up bloody good food; perfect!

In London, restaurants such as Bentleys in Piccadilly, St John, Le Caprice or the Wolseley are fine examples. They’ve stood the test of time by just doing their own thing. Each has its own unique character. They never try too hard, sticking to simple dishes such as eggs Benedict or steak tartar. Simple yes, but prepared with skill and precision. Too many restaurants these days get the simple things wrong, trying to be creative for creatives sake, and why? Who knows? Maybe they think it’s what we all want? But we don’t? Often, I long for a simple piece of fresh local fish, maybe grilled with a beurre noisette. Or how about a plate of lightly seasoned fried sprats and a pint of local ale in Old Leigh. It doesn’t have to be fancy, just keep it fresh and local. Do you think I can find this? Very very rarely. We live in a fishing town; this sort of food should be everywhere!

But this got me thinking, there’s plenty of ‘iconic’ restaurants in London and nationwide, but what about locally, do we have any? A few spring to mind. Although not a restaurant, In Leigh we’ve got Osbornes. They’ve been dishing up our local delicacies for generations, and what’s better than a plate of cockles or a tub of jellied eels sitting on the sea wall? What about Alvaro’s in Westcliff? I nearly forgot about this place, but it’s still there! Tucked away in a side street off Hamlet Court Road, wander in here and it’s like going back in time! It gets packed at the weekends, generally with a crowd of a certain age, but they just do the same they’ve done for years, and somehow it works. How could I not mention my favourite, the good old Pipe of Port. They’re no nonsense pies and hearty fayre have been satisfying diners since the 70’s. Martin, who owns the Pipe, has done a sterling job, bringing it up to date, but not losing the original charm of the place. The Pearl Dragon as well, this was the first Chinese restaurant in the area, and even after all that time they still get it right.

But where am I going with all this? Just the other week, I was downing a few craft beers in the West Road Tap. Currently my favourite past time. Well, I was getting hungry. So, Lou and I began to discuss food. Fortunately, across the road from the tap is Oldham’s. Surely this has got to be one of the most iconic fish and chip restaurants in the area? They’ve been frying up our national dish since 1967. Open 7 days a week, walk in here at any time, and the place is packed with people eager to get their fix of fish and chips. Well there you go, a no brainier really, a bit of deep fried food is perfect after a few ales!

Oldham’s is old skool. I’m pretty certain the place hasn’t changed since it opened its doors back in ‘67. Walk through the take away at the front, and to the rear is a simple restaurant. Shown swiftly to our table, I checked out the menu. You don’t really need me to tell you what was on the menu, its fish and chips of course. But, there are a few other offerings which caught my eye. You don’t often see fresh salmon on a chip shop menu, but they have it at Oldham’s. You have the option of deep fried or poached. Poached, yes, that works for me, but deep fried? Don’t think I get that? An oily and rich fish, deep fried? Not sure that’s for me, but hey, suppose I shouldn’t knock it till I’ve tried it! Battered sausages! I love em! Not uncommon in a chip shop I know, but their quality is often questionable; just how much real meat is in a battered sausage? It’s a mystery! However, Oldham’s batter and fry a free-range sausage no less! A quality sausage! But what am I gonna have to eat? I suppose it’ll have to be good old cod and chips. I could see countless plates of piping hot, golden fish and chips being rushed in to the restaurant and placed in front of other diners, it looked good, how could I resist? Well, I did! and why? I caught a glimpse of something else……Ribs! 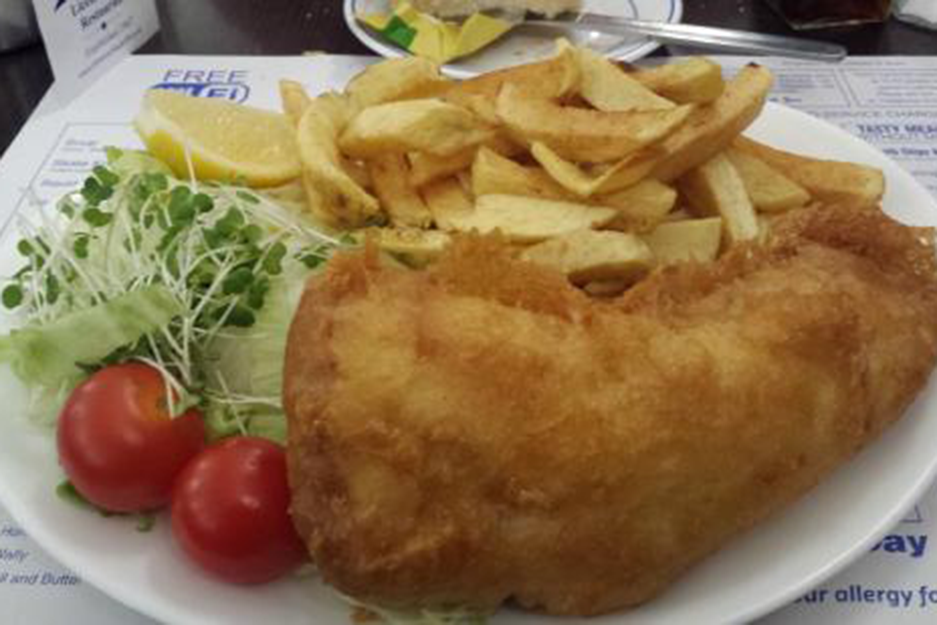 I’m a rib fan. Whenever I go for a Chinese I order them by the bucket load, I can’t get enough of glorious ribs. In the summer, when I BBQ, it’s gotta be ribs! So, the Oldham’s ribs it had to be. Forget ribs as you know them, these ribs are like nothing else. Think, thick, meaty hunks of pork! Yes, these are huge hunks of belly pork, cooked on the bone. They arrived at our table and I couldn’t believe the size of them. I had been presented with a plate of delicious porky goodness. Clearly cooked low and slow, this plate of swine, covered in a rather rich BBQ marinade, just fell apart. In short, these were bloody good. Lou decided on the classic cod and chips. As always, I managed to pinch a tasty piece of the cod. A thick, milky fillet of cod! It flaked apart beautifully, just as a good fresh piece of cod should. The chips here are good too. In my view, chips are the true litmus test of any chippie. I think we all love chips, don’t we? But, they’ve got to be cut from real potatoes on the premises. Homemade chips just taste better than mashed up reformed, greasy efforts guising as chips. A bad chip really grinds my gears! Why don’t more restaurants make their own?? Naturally, you would expect a chip shop to make their own? And of course, they do at Oldham’s.

Believe me, I know of one very popular place in Leigh which just serves up Fish and chips, that’s all they do. But, they buy in frozen chips, GIVE ME STRENGTH. I’m not going to name and shame, that wouldn’t be fair. But surely, if you are going to serve up one thing, you’d think they’d want to do it well? A little bit of effort wouldn’t go a miss. Of course, if I want fish and chips I avoid this particular place! But back to Oldham’s, their chips are a good old classic chip shop chip, cut from real potatoes. They’d past my litmus test with flying colours.

Over the past couple of weeks, I’ve written about my foodie bucket list, which since the new Michelin Guide was launched last week, has grown somewhat. This bucket list comprises of legendary Michelin starred restaurants and other iconic eateries. This is a list I am gradually chipping away at. However, as nice as it is to dine in three-star restaurants, with fine food and wine, the humble fish and chip supper has stood the test of time. Yes, some fancy restaurants try and make this British staple ‘fine dining’. It doesn’t work, they’re just bastardising a thing of beauty. I mean, what the hell are ‘Jenga Chips’? Who first had the idea of stacking these precision cut ‘chips’ in Jenga fashion. It’s just utter crap. Why why why would you wanna mess with our national dish, there should be some sort of foodie law against this. When I want fish and chips, I want a plate of proper chips and a lovely bit of fish. Something us brits have been doing for years, and that’s exactly what can be found in Oldham’s; one of the most iconic fish and chip restaurants in the local area. This month, The Mughal Dynasty writes about ghee, how it's used in Indian coo...